Understanding how a key mutation influences the development of schizophrenia

Dr. Jacob Vorstman’s new paper could help us better understand the causes of schizophrenia. A genetic variation called 22q11.2 deletion syndrome has been linked to schizophrenia, but the relationship is not clear cut. Dr. Vorstman has identified other genetic factors that influence how 22q11DS affects the likelihood that someone will develop schizophrenia.

JV: 22q11.2 deletion syndrome is a condition where a small piece of DNA is missing from chromosome 22. We don’t know exactly how frequently it occurs, but around 1 in 2,000 to 1 in 4,000 people have it. Though rare, when it does happen, it can have a large impact. 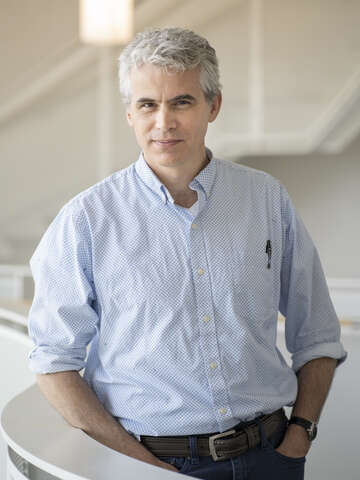 What risks are associated with 22q11DS?

JV: People who have 22q11DS are at risk for a range of physical and mental health issues. Learning difficulties, autism spectrum disorder, ADHD and schizophrenia are common mental illnesses. In fact, one in four individuals with 22q11DS develops schizophrenia, making it the strongest known single genetic risk factor for this mental illness.

What motivated this research?

JV: For this study, a key question we wanted to address is how the clinical manifestations can be so different even though the genetic variant is the same. This issue poses a formidable challenge and makes it very difficult to apply group observations (for example, "25% develop schizophrenia") to the individual patient and their family in clinic. I think scientific curiosity about why so much variation exists and the desire to improve our ability to use genetic knowledge in the clinic were the main drivers for this study.

What was the most important finding of this study?

JV: In essence, we show that the rest of the genome has an important role in modifying the impact of 22q11DS. We needed to remind ourselves that although this deletion has a large impact, it is only a tiny piece of our entire genome. We focused on common genetic variants, summarized in “polygenic scores”. A polygenetic score is a measurement that summarises the estimated effect of many genetic variants on an individual's genes. We used these polygenic scores to uncover genetic correlations between cognitive ability, cognitive decline, and schizophrenia in patients with 22q11DS. We found that the information hidden in the rest of the genome can be used to substantially improve accuracy of prediction of schizophrenia and intellectual disability outcomes in individual patients with 22q11DS.

How will this research change the care and treatment for patients with 22q11.2 deletion syndrome, other genetic syndromes, and schizophrenia?

JV: As always in science, we would like to see independent replication of our findings before these results are used in clinical care. This said, several insights from this study may contribute, eventually, to better clinical care.

In our paper we explicitly state that although accuracy of individual prediction is markedly improved when taking into consideration other genes, our methods are not yet ready to be implemented in clinical care. Ideally we require larger effect sizes to make the predictions clinically useful. However, there is good reason to be optimistic, because the accuracy of the polygenic scores is improving with each new iteration of the large case-control studies in the population from which they are derived. We anticipate that our predictions will continue to improve.

Any next steps in your research program?

JV: In a way, our paper in Nature Medicine provides proof of principle. The next steps are replicating our findings, exploring ways to further improve the prediction metrics and expanding our findings in groups of individuals with other rare, high impact genetic variants. We are fortunate to have received funding from the McLaughlin Centre to do exactly that.

What is the major take home message for the public?

Preventing the reincarceration of prisoners with mental illness

Relieving the burden of apathy for people with Alzheimer’s disease